Is the EU finally ready to stop buying Russian oil?  One of the last holdouts to an embargo was Germany.  However, the Wall Street Journal reported on Thursday that Germany is now ready to stop buying oil from Russia.  The EU will now have to find oil elsewhere, which has help push the price of WTI and Brent Crude Oil up over 2.5% today.

How to start trading oil

WTI Crude Oil had been moving higher in an orderly fashion until March 1st, when it began its parabolic move to 129.42 on March 8th.  Price has pulled back since then, putting in a series of lower highs, however Crude has been basing near 95.50.  With today’s move higher, price has moved above a long-term trendline dating to March 8th, 2021 and the 50 Day Moving Average near 103.11. 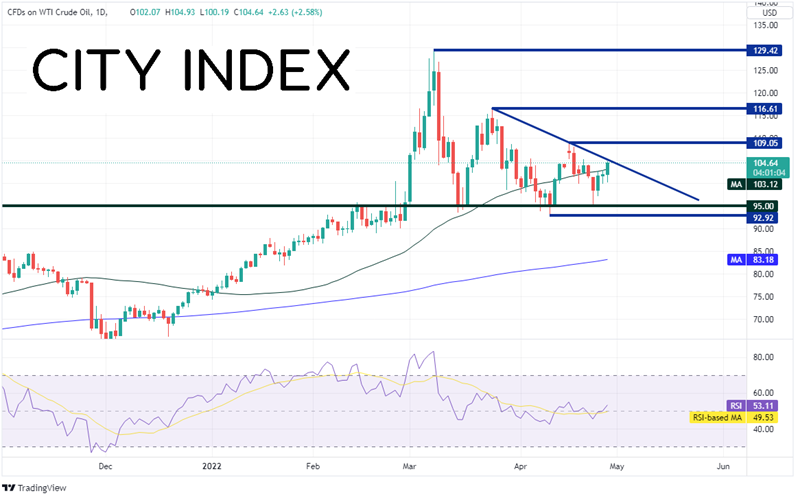 On a 240-minute timeframe, price is banging up against a downward sloping trendline dating to March 23rd.  This acts as the first level of resistance. If price breaks above, horizontal resistance levels cross at 109.05, 116.16 and the March 8th highs at 129.42. The first support level is today’s low, which is also the upward sloping trendline on the daily timeframe, at 100.19.  Below that, support is at the April 25th lows of 95.25, then the spike low on April 11th to 92.92. 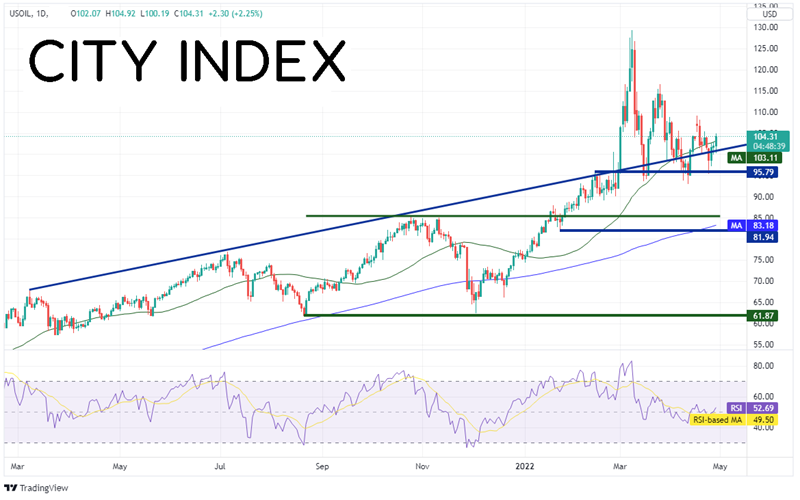 The daily Brent oil chart is similar to that of the WTI chart, except that the upward sloping trendline comes in much lower than current price.  Today’s move in Brent has pushed it through the 50 Day Moving Average at 106.43, as price consolidates in a symmetrical triangle.  First resistance is at the downward sloping trendline of the triangle near 110.00, then horizontal resistance at 113.95 and 120.42.  First support is at the bottom trendline of the triangle and the April 25th lows near 99.22. Below there, price can fall to the lows of March 16th at 95.51 then the 200 Day Moving Average near 85.78. 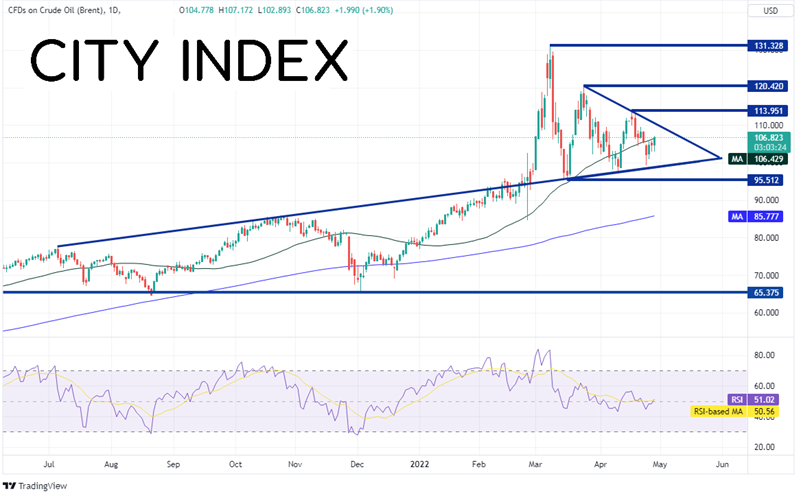 As the EU prepares for an embargo of Russian oil, price has gone bid.  If both WTI and Brent can break through out of their respective triangles, they both may have room to run on the upside.