Could tomorrow's Michigan Consumer Sentiment be the key for the FOMC’s decision next week?

Let’s rewind for a moment to June 15, 2022.  The FOMC hiked rates by 75bps from 1% to 1.75%.  Recall that in the 10 days prior to the FOMC meeting, the Fed was in its blackout period.  This is a period of time when FOMC members are limited as to when they can speak publicly. Also recall that during the blackout period prior to the June FOMC meeting, the US released its May CPI report.  CPI during May was expected to be 8.3% YoY, while the actual print was 8.6% YoY. In addition, the Core CPI was expected to be 5.9% YoY vs and actual print of 6%.  Also, during the blackout period, the Michigan Consumer Sentiment Preliminary report for June was released.  The print was 50.2 vs 58 expected.   The 5-Year Inflation Expectations Preliminary print was 3.3% vs 3.0% expected, while the 1-Year Inflation Expectations Preliminary print was 5.4% vs 5.3% expected.  As a result of the higher than expected inflation data during the blackout period, the Fed “leaked” to the Wall Street Journal that it intended to hike rates by 75bps, as opposed to the 50bps that the market was expecting.

On a weekly timeframe, US 2-year yields are highly correlated with the US Dollar.  The panel at the bottom of the chart below shows that on a weekly timeframe, US 2-year yields and the US Dollar Index (DXY) have a correlation coefficient of +0.86.  Readings above +0.80 indicate a strong positive correlation.  Therefore, to get an idea of where the US Dollar is headed, traders should be watching US 2-year yields.  This week, the key yield reached its highest level since November 2007.  In addition, yields traded above resistance at the 127.2% Fibonacci extension from the highs of November 2018 to the pandemic lows of February 2021, near 3.854%.  Also notice that although yields were diverging from the RSI in overbought territory, the RSI has turned up again from neutral territory and is moving with yields once again.  The next resistance level for yields isn’t until 4.517%, which is resistance from 2007.  Above there, 2-year yields could reach the 161.8% Fibonacci extension from the previously mentioned timeframe at 4.752%.  First support is at the June highs near 3.454%, then the upward sloping trendline dating to early April near 3.057%. 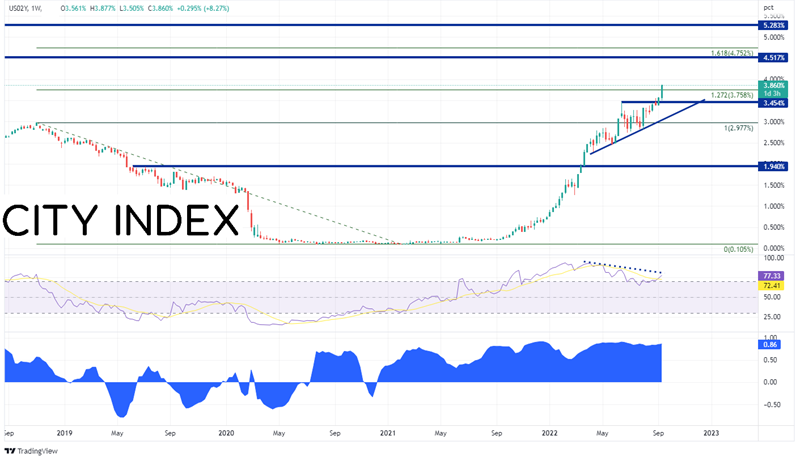 If the inflation components of the Michigan Consumer Sentiment Index for June are higher than expected, watch for a possible tape-bomb from the Wall Street Journal that the Fed is “more likely” to hike 100bps rather than the expected 75bps.  In addition, watch for 2-year yields to move higher.  In turn, the US Dollar should move higher and its counter currencies should move lower.  In particular, watch EUR/USD and GBP/USD which are in striking distance of multi-decade lows and USD/JPY, which is once again nearing multi-decade highs.