Conditions may have turned favourably for gold bugs

Over the past 48-hours conditions have turned favourably for gold traders. Risk-off flows stemming from the EU’s decision to ban Russian oil imports helped support prices ahead of yesterday’s FOMC meeting. And the US dollar was arguably overstretched at it multi-year highs along with expectations for 75bps from the Fed, which Jerome Powell has since quashed. Given inflation remains rampant and the Fed aren’t as aggressive as some pre-emptive bulls had hoped, some will see gold as an inflation hedge once again.

Gold’s rise is not just a weaker-dollar story, as it has been rising in tandem against all major currencies following the Fed meeting. But it has also performed well this year overall. Thanks to the BOJ’s forever-dovish policy it has risen 17% against the Japanese yen whilst also achieving double digits against the Swiss franc, euro and pound. Gold has even out shined silver with a 13.3% YTD rally. But perhaps a bigger show of strength is it has risen 4% this year against the mighty US dollar, which is pretty good considering the dollar briefly tapped a 20-year high last month and yields have been screaming higher with it. Furthermore, large speculators had been trimming longs and increasing short exposure to gold futures these past weeks. And now is likely a time they’ll look to reverse those positions. In a nutshell, we’re now anticipate an upswing for gold against major currencies.

How to start gold trading 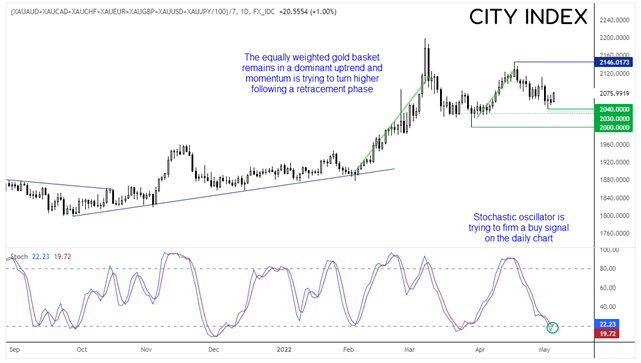 A quick look at our gold basket suggests an important swing low has formed for gold. Equally weighted against FX majors, the gold basket intends to remove the US dollar’s dominance on gold to better reflect the underlying trend for gold itself. Encouragingly we can see that it remains in an uptrend overall and has printed a potential swing low on Monday, just above 2040. Today’s price action in Asia is decisively bullish and we’re currently on track for the stochastic oscillator to generate a buy signal on the daily chart. 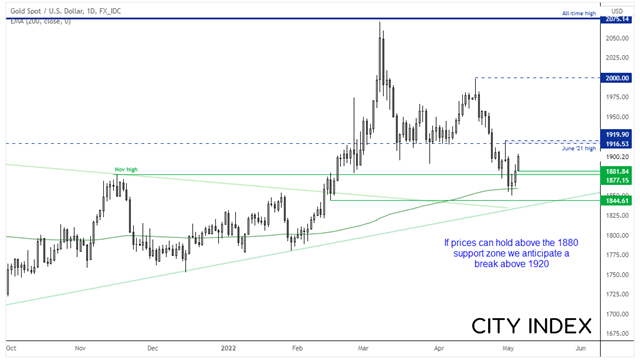 Gold (XAU/USD) has extended its bounce from the 200-day eMA and risen to a 4-day high. It’s also broken above the 1880 resistance zone we’d flagged as a pivotal level and reignited our bullish bias. Naturally, the post-FOMC rally has met resistance around 1900 but, as long as prices remain above the 1880 area, we are now anticipating a break above 1920 to signal trend continuation. And a close above 1920 would be significant as it then sees prices back above last week’s swig high and the June 2021 high.