The first half of Monday’s session has been all about China, thanks to a quiet economic calendar and lack of fresh speeches by any major central bank officials. Although stocks and futures have come off their worst levels, markets remain vulnerable. There are concerns China may tighten Covid curbs further after first Covid-related death in almost six months was reported, and a city near Beijing enforced a slew of restrictions.  So, there are fresh concerns about growth in the world’s second-largest economy, which means the yuan is weaker along with copper and a few other risk-sensitive assets. Last week saw oil prices plunge by nearly 10% as in light of fresh concerns over China.

But it was not a complete risk off environment, with the FTSE for example holding its own relatively well and Spain’s IBEX trading higher in the first half of Monday’s session.

On the one hand, investors are trying to price out the risks of further sharp rate increases around the world amid signs that inflation has peaked. The possibility that central banks in Europe and US about to tilt to a more dovish stance has raised hopes that the worst of the sell-off for risk assets is over.

But on the other hand, they will be happy not to take excessive risk amid concerns over China. Traders are also concerned by continued weakness in crypto prices in the wake of FTX’s collapse. With this also being a quiet day and week in terms of macro data, they are understandably keen to proceed with caution.

What’s more, rate increases are nor yet pausing in the US. Among the Fed officials who have spoken last week, their message has all been similar – i.e., that their fight against inflation continues and more rate increases are on the way. St. Louis Fed President James Bullard said interest rates need to rise further to a 5%-7% range. San Francisco Fed President Mary Daly said a pause in rate hikes was “off the table.”

So, Fed speakers suggest that rate hikes could slow, but they are likely to continue for longer, which may mean a higher peak fed fund rate anyway.

There are no high-impacting US economic data due today, so China is likely to continue dominating the agenda.

Concerns over China are continuing to drive the markets, so it is only right I start this week’s coverage by looking at the yuan. The USD/CNH has rallied, with copper and oil remaining on the backfoot, along with some other risk-sensitive assets like the Aussie and China’s stock market.

Now, the USD/CNH has more than made up the losses we saw Friday when the sellers stepped in to defend resistance at around 7.1700 area. If the USD/CNH holds above here on a daily closing basis then this could pave the way for a run towards the next resistance around 7.2293, the base of the recent breakdown. 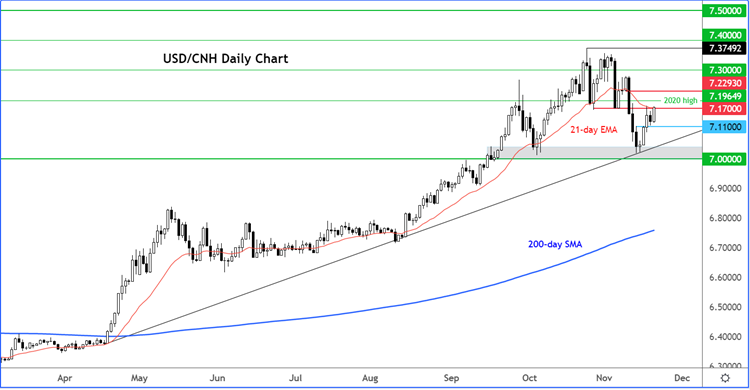 Meanwhile, if resistance holds, then the next support is seen around 7.1100. If we get there and that level breaks down, then the long-term bull trend line will come into the focus again.