Today’s monetary policy decision by the Bank of Canada could be the last time we will see the North American central bank raise rates in this hiking cycle.

The central bank is widely expected to hike rates by 25 basis points at today’s meeting, which would mark a slowdown from a 50-basis point hike in December and 75 bps point hikes across the middle of last year.

Inflation in the US and Canada have been falling, which is why the US and Canadian dollars have been moving lower, with investors speculating that the days of policy tightening could be numbered for both central banks.

In Canada, the latest inflation report revealed price pressures have eased from an 8.1% post-pandemic peak to 6.3% currently. The BoC expects CPI to fall to its 1-3% target range by the end of the year.

If the BoC raises rates by 25 basis points and hints at a pause, then the CAD could drop sharply. If so, the CAD/JPY is the pair to watch as the yen has been strengthening amid speculation that the Bank of Japan might end its ultra-loose monetary policy soon.

The CAD/JPY has already respected its bearish trend line with the pair finding some resistance around 97.75 area. It could be heading to the next support area around 95.57 in the event the BoC does not deliver any hawkish surprises. It may even go on to print a new low beneath last week’s low at 94.63.

However, in the event of a hawkish surprise either in terms of the rate decision itself or comments from the BoC governor Tiff Macklem about the future path of monetary policy, the CAD/JPY might go on to break the tend line. If that happens, we will need to see a close above that 97.75 level to confirm that the bear trend has ended at least temporarily.

As things stand, though, the path of least resistance is to the downside and we favour bearish over bullish setups. 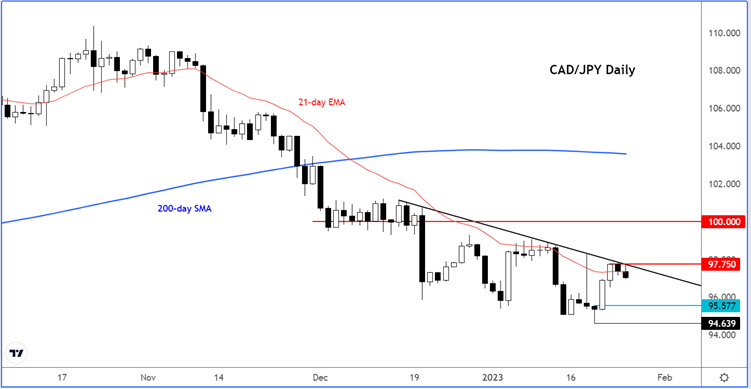