Brainard and George: Perfect storm for US Dollar to push to 100?

Federal Reserve Governors Lael Brainard and Esther George were on the wires today, both coming out with hawkish comments that pushed the US Dollar higher.  Brainard said that “the Fed is prepared to take strong action if inflation and inflation expectation indicators suggest the need for such action”.  In addition, she discussed rising wages and that the Russian invasion of Ukraine may further boost food and gas prices.  Brainard has tended to lean dovish, so when she spoke with a hawkish tone, the markets noticed!

Fed Governor George was speaking around the same time ask Brainard. She said that a 50bps rate hike is option the FOMC has to consider.  She also said that it’s possible that the Fed may have to go above neutral in order to bring down inflation.

These comments were hawkish enough to send the US Dollar bid.  The DXY (US Dollar index) had been in an upward sloping channel since May 2021.  On March 4th, the index broke above the top of the channel and made a high of 99.41 on March 5th.  Since then, price has been oscillating around the top trendline of the channel between 97.68 and 99.41. On a 240-minute timeframe, DXY made a new high and traded above 99.41, its highest level since May 2020.  Will price make it to 100?  If it does, it must first break above the 127.2% Fibonacci extension from the highs of March 5th to the low of March 30th, near 99.89.  Above there resistance is at the psychological round number of 100, then the 161.8% Fibonacci extension from the same timeframe near 100.49.  However, notice that the RSI in in overbought territory, an indication that the DXY may be ready for a near-term pullback.  If this move proves to be a false breakout, support is at today’s low near 98.84, then the March 30th lows near 97.69.  Below there, price can fall to the bottom trendline of the channel near 96.75. EUR/USD makes up roughly 57% of the DXY and therefore, tends to trade in the opposite direction.  On the 240-minute timeframe, EUR/USD had broken below an ascending wedge.  After a retest of the bottom trendline of the wedge near 1.1184, the pair moved lower and today took out the lows from March 28th near 1.0945.  Support below is at the March 7th lows of 1.0806.  Notice however that the RSI is oversold, indicating the possibility of a reversal.  Resistance is at the 1.0945 breakdown level then horizontal resistance at 1.1028. 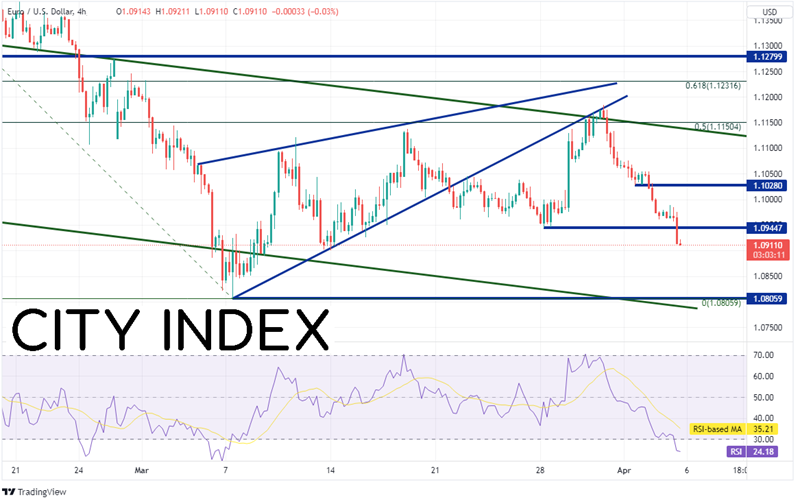