BOJ can talk the talk, but can it walk the walk?

The Bank of Japan loves to talk. Just the other day, BOJ’s Governor Kuroda said how FX moves are undesirable and that he is watching exchange rates very carefully.  Comments such as these have been said for the last five months or so, as USD/JPY broke above 116.25 in early March.  However, it isn’t just the BOJ making these comments!  Just last week, the Bank of Japan, the Ministry of Finance and the Financial Services Agency met to discuss the depreciation of the Yen as USD/JPY reached its highest level in 24 years, near 145.00.  Today, Japanese Finance Minister Suzuki said, “recent JPY moves have been quite sharp” and he reiterated that Japan will not rule out any options when comes to intervention.  All this talk is considered verbal intervention, in which Japanese government officials try and talk up the value of the Yen.

Today, the BOJ took intervention to the next level.  Rumors began swirling during the Asian session that the Bank of Japan “checked rates”.  Sources later confirmed this to the Nikkei. This occurs when the Bank of Japan calls around to the large bank’s foreign exchange desks and asks them the level of Yen pairs.  This next level form of intervention is meant to scare Yen shorts, who fear that the BOJ will enter the market and buy Yen to bring its value higher.  After yesterday’s increase of over 170 pips, USD/JPY was nearing the September 6th high near 145.  After the BOJ checked rates, the pair fell from a high of 144.96 to an intraday low of 142.55. 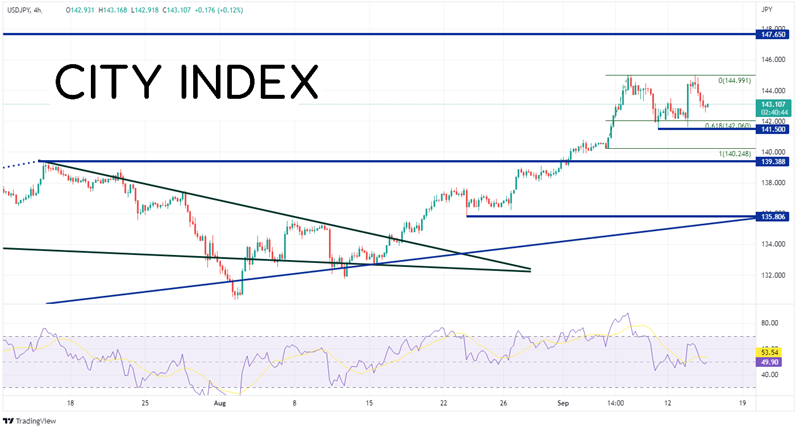 Will verbal interventions and other ”tools” that the BOJ has work in strengthening the value of the Yen?  As long as interest rate differentials continue to widen between Japan and other countries with high inflation, it doesn’t seem likely.  However, if inflation and inflation expectations begin to come down, so will interest rate expectations.  In turn, this would increase the value of the Yen (and lower xxx/jpy pairs).  The BOJ meets next week.  Watch for the central bank to use additional tools to try and strengthen the Yen.