The Bank of Canada raised rates for the first time since October 2018 by 25bps to 0.50%.  This is in-line with most economists’ expectations; however, many market participants were hoping for a 50bps increase.  (See our Bank of Canada preview here). The BOC noted that it would continue the reinvestment phase of its balance sheet by keeping bond holdings constant.  In addition, the central bank said that it expects to increase interest rates further due to higher inflation from both energy and food-related commodities.  The Bank will use monetary policy tools to return inflation to the 2% target and keep inflation expectations well-anchored.

Guide to the Bank of Canada On a 240-minute timeframe, USD/CAD tried to break above the top of the month-long channel and failed.  Often, when price fails to move above one side of a channel, it moves to test the other side of the channel.   Support is at the bottom horizontal channel line near 1.2636.  If price breaks below, it can move  to the horizontal support and the 127.2% Fibonacci extension from the low of February 10th to the high of February 24th near 1.2570. The third level of support is at the 161.8% Fibonacci retracement level from the same timeframe and the 50% retracement level from the June 1st, 2021 low to the December 20th, 2021 high, near 1.2485. 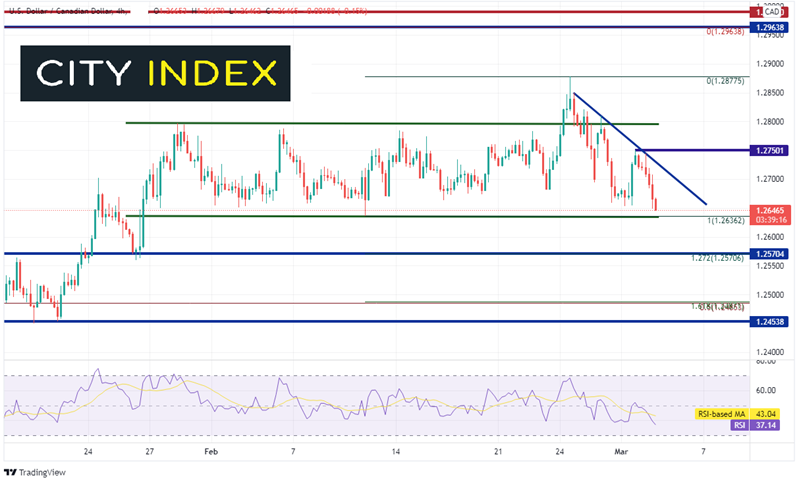 Resistance is at today’s highs and the downward sloping trendline from February 24th near 1.2745. The next resistance level is the top horizontal trendline near 1.2777 and then the February 24th highs at 1.2878.

The Bank of Canada hiked rates by 25bps, as expected, and said that there is more to come!  As a result, USD/CAD has moved lower and is nearing the bottom of the long-term channel the pair has been in for the last month.  Watch the additional support below!