After most of the data for the week, GBP/USD advancing

Earlier this week, in the Currency Pair of the Week, we discussed how most of the movement for the GBP/USD would be data dependent. On Tuesday, the UK released the Claimant Count Change for April at -56,900 vs -42,500 expected and a revised March print to -81,600.  The Unemployment Rate for March fell to 3.7% vs 3.8% expected and 3.8% in February.  This is the lowest reading since 1974!  Average Earnings Including bonuses for March rose to 7% vs and expectation of only 5.4% and a February reading of 5.6%.  As a result, the labor picture is looking solid and should be a positive for GBP/USD.

Still yet to come from the UK on Friday is Retail Sales, where both the headline and the ex-Fuel numbers are expected to improve to -0.2% MoM was previous readings of -1.4% MoM and -1.1% MoM, respectively.

In the US, the big news that caused stock market indices to sell off was not necessarily the Retail Sales data for April that was released, but rather the release of big retailer earnings from companies such as Walmart and Target.  The companies not only missed earnings, but also guided lower.  One may expect that the US would jump significantly on the news, however it remained subdued as USD/JPY and USD/CHF sold off aggressively as funds flowed into “safety” currencies.

What are safe havens?

As for GBP/USD, on the 240-minute timeframe, the pair moved higher into today, breaking out of the descending wedge the pair has been in since early May.  The target for the breakout of a descending wedge is a 100% retracement, or 1.2638.  This level also confluences with the 50% retracement from the highs of April 21st to the lows of May 13th, near 1.2622. 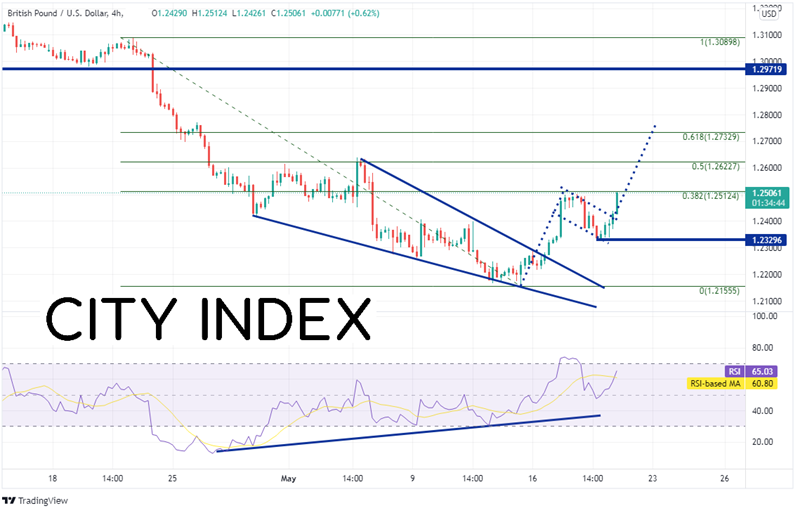 Currently, GBP/USD has broken above a flag pattern that price has formed while on its way to the descending wedge target.  The target for the flag pattern is the length of the flagpole added to the breakout point of the flag, or near 1.2760.  This also confluences with the 61.8% Fibonacci retracement level from the above-mentioned timeframe.  However, if GBP/USD is to reach either target, price must first get above the 38.2% Fibonacci retracement level at 1.2512. If the pair fails to move higher, first support is at the May 18th lows of 1.2330.  Below there, price can fall back to the lows of April 21st at 1.2156.

GBP/USD has been moving higher this week as a result of the strong labor market in the UK and the high inflation readings.  Can the pair continue to move higher towards the descending wedge and flag formation targets?  It may depend on the overcome of tomorrows Retail Sales data!